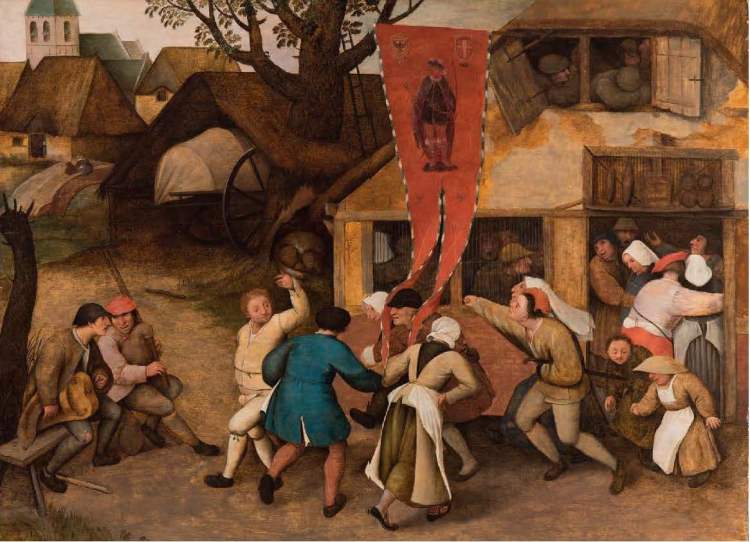 A new book puts forward the thesis that Dancing Peasants at a St. Sebastian’s Kermis, long attributed to a follower of Pieter Bruegel the Elder, was in fact painted by the Elder Bruegel.  Maximiliaan P.J. Martens, on the Faculty of Arts and Philosophy at the University of Gent, makes this startling claim in Dancing Peasants at a St. Sebastian’s Kermis: A Rediscovered Painting by Pieter Bruegel the Elder (Silvana Editoriale, 2019).

Martens saw the painting in 2016 and recognized the hand of Pieter Bruegel the Elder under multiple layers of old retouching and over paint.  Martens makes a compelling case that similar typology of figures, materials and objects in Dancing Peasants at a St. Sebastian’s Kermis are spread throughout Pieter Bruegel the Elder’s oeuvre.  He also puts forward the notion that the painting’s style is very similar to the elder Bruegel’s work. Subsequent technical examination and careful cleaning revealed numerous features characteristic of the master’s style and technique, according to Martens

A scientific analysis was conducted on the materials, which, combined with the observation of how they were employed, led Martens to the conclusion that the works was by the hand of the elder Bruegel.  The painting is made up of oak quarterly split boards with slanting that is typical of the type that Bruegel employed, which were butt joined with dowels. The panel was prepared with calcite mixed with animal glue and has and has an imprimatur consisting of a brownish ochre hue with lead white and particles of carbon black mixed in, again typical of the elder Bruegel.

Martens notes that the underdrawing is invisible to the naked eye, and even hard to distinguish through infrared reflectography.  He concludes that as with a large number of other Bruegel paintings, it was likely traced from a 1:1 cartoon.  The tracing was reinforced in a liquid material, likely to be identified as black carbonaceous ink. He notes that pigments that have been identified fits the palette from other paintings by Bruegel.  Martens attributes the painting to late in the artist’s career, around 1567–1569.

Martens was not the first to attribute the painting to Pieter Bruegel the Elder.  The eminent art historian Max J. Friedländer similarly attributed to Bruegel the elder in the early 20th century.

One area of research not detailed in the monograph is a dendrocronological analysis of the boards used in the paintings.  Sotheby’s included an analysis when the work was sold in 2016 and noted:

Of course, if this analysis is correct, the painting would have been executed after Bruegel the Elder’s death in 1569.  We look forward to learning Martens’ dendrocronological analysis, which the author indicated is forthcoming.

The work appeared last at auction in 2016 at Sotheby’s London, selling for £156,250 after an estimate of £80,000 – £120,000. If the attribution to Bruegel the Elder holds, the work will be worth millions, making this one of the greatest returns on investment of an Old Master painting in recent years.