A review of “Pieter Bruegel” by Larry Silver, Abbeville Press, 2011

The images created by Bruegel come thrillingly to life in this Abbeville Press monograph.  This handsome volume, written by Larry Silver, Farquhar Professor of Art History at the University of Pennsylvania, puts forward new insights into Bruegel and the time in which he lived.   Silver set out to document Bruegel’s output in prints, drawings and paintings by focusing on patterns and areas of interest common to these diverse media.  Silver places Bruegel in the social and historical context of his time, as a commentator of the religious and political unrest occurring in the Netherlands during his short lifetime.  Silver also includes information not typically found in other Bruegel monographs, documenting the rise of Bruegel scholarship at the end of the nineteenth century, when the new country of Belgium began to look for a native artist to celebrate.

Silver’s first chapter focuses on “Chris Carrying the Cross,” recently made into the fascinating film by Lech Majewski and discussed in a previous blog entry.  This chapter is an excellent companion piece to the film, setting Bruegel’s work in the context of Rogier van der Weyden, who lived before Bruegel, as well as Bruegel’s contemporaries such as Joachim Beuckelaer.  For Silver, “Christ Carrying the Cross” showcases Bruegel’s range of expression found in his earlier prints, as well as pointing the way to his groundbreaking final paintings, which break with the traditional staging of peasant and religious scenes.

Other chapters cover Bruegel’s life in Antwerp, his prominent patron Nicolaes Jonghelinck and his time with print maker (and future father-in-law) Hieronymus Cock.  In a chapter on Bruegel as the “second Bosch,” Silver describes a fascinating transition between the “Bosch” brand, which Bruegel used early in his career, to the “Bruegel” brand, which was not only used by Bruegel but continued by his son and followers for generations.

Silver’s chapters on religion and tradition include an analysis of Bruegel’s ongoing interest in soldiers and weapons, placing Bruegel’s art in the broader context of earlier German images of important battles, such as the Battle of Pavia, which clearly had a significant influence on the artist.

It is inevitable that a Bruegel monograph would include a section on peasant labor and leisure, but Silver manages to put an interesting new spin on this oft covered subject.  Building on Alison Stewart’s recent work, Silver shows Bruegel continuing and expanding the tradition of scenes found in German woodcuts.  The fascinating scholarly debate between whether Bruegel’s treatment of peasants was sympathetic or moralistically critical is covered well by Silver.

One of the aspects of the monograph that I enjoyed the most was Silver’s careful treatment of lost works by Bruegel that have come down to us through copies by his sons.  Silver rightly points out that these lost works deserve robust, careful consideration in the context of original Bruegel’s that survive and should not be discounted as is typical in other Bruegel monographs.  Paintings such as “Wedding Procession” and “Visit to a Farmhouse” are two examples where only copies survive, but nevertheless are important components of the Bruegel oeuvre.

The final chapter, which details Bruegel’s legacy, includes an analysis of works by his sons, as well as those who copied or even forged Bruegel’s works.  Silver sees this as Bruegel coming to assume a similar status as Bosch, where “Bruegelian” images and themes were adapted and repeated to great commercial success.  Silver concludes the monograph by highlighting how no single scholarly consensus has emerged for Bruegel.  Rather, he is viewed through the prism of the agendas of scholars who study him.

This monograph is highly recommended.

Years ago, while visiting the National Gallery of Denmark, I was stopped in my tracks as I came across a painting identified as a Bruegel the Elder work.  I wasn’t floored so much for the painting’s beauty, but my mouth hung open because I had never seen it or heard of it before.  The painting, “Christ Driving the Money-Lenders From the Temple,” was listed in none of my many Bruegel monographs.  How could this be? I wondered.  How can a museum hang a work and call it “Bruegel” when everyone else in the world doesn’t agree that it is a Bruegel?

Currently a fascinating exhibit covering the painting is underway.  Tracing Bosch and Bruegel: Four Paintings Magnified investigates four similar paintings that are done in the Bosch style, which was also emulated by Bruegel in his earlier paintings.  The exhibit seeks to answer the questions of who painted the works and when were they painted.  Further, how did these four very different paintings of essentially the same scene come to hang in the three galleries and one private collection?

While my specific question regarding the labeling of the Copenhagen painting isn’t answered in the exhibit, it does provide countless other fascinating details.  You can learn more about the exhibit at the excellent website: http://www.bosch-bruegel.com.  The creators of the website should be applauded at their exceptional work.  While I am not likely to see the exhibit in any of the locations to which it travels, I feel as if I have experienced it due to the wealth of information provided on the web.  In addition, at least two conferences and a monograph are planned around the exhibitions, with further interesting information certainly to be revealed.

I’ve really enjoyed reading the Twitter feed as the exhibit came together. Hannah Tempest did an excellent job tweeting the process of cleaning and restoration, and providing highly interesting images.

The questions remains – after the exhibit and the Copenhagen painting travels back to the National Gallery – will it still be labeled as “Bruegel?”

I’m interested to hear from folks who have seen the exhibit first hand.  What was it like? 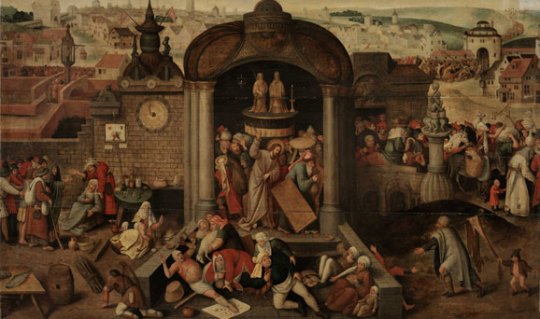 Christ Driving the Money-Lenders From the Temple