The 450 anniversary of Pieter Bruegel the Elder’s death, in 2019, ushered in many exciting projects to commemorate the milestone.  Perhaps none as rich and diverse as this conference and accompanying 550-page monograph, which included groundbreaking papers on all aspects of the Bruegel family.

I was fortunate to attend the conference and can happily replace my scribbled notes and crude drawings created when seated in the audience with this exquisite monograph.  It is perhaps the most beautifully illustrated Bruegel monograph based on conference papers that I’ve ever seen.  Many of the Bruegel paintings reproduced in the monograph were recently cleaned and restored, which the monograph fully captures with large, rich illustrations.  Not only are the paintings themselves reproduced, but enlarged details of critical sections of the paintings are featured.

The monograph’s first section includes a series of articles on the newly restored Dulle Griet, done in preparation for the Bruegel exhibition at the Kunsthistorisches Museum in Vienna in 2018 -19, in conjunction with the Museum Mayer Vanden Bergh in Antwerp, where the painting hangs.  The conference brought to light that Dulle Griet was likely transferred from cartoon tracings after Bruegel carefully worked out the picture on other media.  The recent cleaning of the panel has uncovered that many of the painting’s pigments have faded or darkened.  The cleaning exposed a vital missing feature of the painting, the date of execution of the work.  A fascinating essay details a colored drawing of Dulle Griet, housed at the Kunstpalast, Dusseldorf.  The drawing helps convey the painting’s original colors which have faded over the years.  The analysis of the paper on which the drawing was rendered revealed a watermark from no earlier than 1578, confirming its status as a copy.

The second section of the monograph is devoted to a group of papers related to Pieter Bruegel the Elder and his practices.  Groundbreaking scholarship considers Bruegel’s paintings on distemper on lined canvas (Tuchlein), a format which Bruegel was one of the last to utilize.  Essays on The Adoration of the Magi (in the Royal Museum of Fine Arts, Belgium), by Veronique Bucken, provide intriguing details about this format of painting.

Bruegel used a variety of methods to paint his monumental panel paintings.  For example, compared to Dulle Griet, the Detroit Wedding Dance, was drawn free hand using an “extensive and vigorous drawing with numerous adjustments to the modeling and shading of the figures, but not the composition as a whole.”  Another surprise is the finding that the Wedding Dance was altered from its initial composition size through the addition of a top border.  This is discussed in an intriguing paper by Marie Postec and Pascale Fraiture that compares the Detroit version with a little studied copy after Bruegel the Elder in Antwerp.

The third section of the monograph is devoted to Jan Brueghel, son of Pieter the Elder.  Several essays review the difference between Jan and his elder brother, Pieter the Younger, in terms of creating copies after their father’s works.  Elizabeth Alice Honig’s “Copia, Copying and Painterly Eloquence,” describes Jan Brueghel the Elder and the notion of copia, as articulated for a Renaissance audience by Erasmus in his De Copia.  In Uta Neidhardt’s paper, “The Master of the Dresden Landscape with the Continence of Scipio: A Journeyman in the studio of Jan Brueghel the Elder?” identifies two different “hands” working in Jan Brueghel’s studio.  The essay is important because so little is known about those painters that worked in proximity to Jan’s studio. The essay remarks on the difficulty in assigning works to specific studio hands.  (An issue that was on display just last month, when Christie’s sold a work dated 1608 stamped in copper by “Pieter Brueghel III,” owning to what is undoubtedly a spurious signature.)  Larry Silver’s essay “Sibling Rivalry: Jan Brueghel’s Rediscovered Early Crucifixion,” focuses on the difference between Jan the Elder and Pieter the Younger’s treatment of a lost composition of Pieter the Elder.  As can be seen frequently in the brother’s work, Jan the Elder creatively re-invents works based on his father’s design, while Pieter the Younger copies his father’s works in a fairly precise manner.

Section four investigates Bruegel’s network and legacies.  The question of who painted some of the works after Bruegel the Elder’s untimely death in 1569 and his sons first paintings decades later remains a key mystery yet to be solved.  Intriguing essays related to Bruegel’s networks, contracts and connection to homes and studios in Antwerp help put pieces of the puzzle together.  Lost works like The Heath allow us to ponder questions of authorship and the number and varieties of copies made (most likely) by non-Brueghels.

The Bruegel “craze” of the early years of the 1600’s and the aftermath of Bruegel’s death is also covered in this section, which details the many ramifications of the aftermath of Bruegel The Elder’s untimely death.  The monograph is rife with intriguing aspects of Bruegel’s legacy, including “Peasant Passions: Pieter Bruegel and his Aftermath” (Ethan Matt Kavaler) and “In Search of the Bruegel’s Family Homes and Studios in Antwerp” (Petra Maclot).

The devotion of eight pages to the restored Dulle Griet in an addendum of the monograph speaks to the exquisite care taken to showcase the paintings of Bruegel and his family.

That the quality of the monograph, with all of its finely detailed images, matches the uniformly high quality of the papers within, is a testament to the care that went into creating this handsome volume.  It is wonderful that the conference papers are presented in such rich surroundings.

The full table of contents of this stunning monograph is below:

Detective Hunt for a Lost Bruegel

Laurence Smith has conducted interesting research on a “lost” Bruegel work.  After viewing a black and white print in “Pierre Bruegel L’Ancien” by Charles de Tolnay (1935) , Smith began doing research on the van der Geest collection that contained the lost work and found a passage in the Phillippe and Francois Roberts-Jones “Pieter Bruegel” (1997) monograph stating:

“ … One of the richest collections in Antwerp in the mid-seventeenth century was that belonging to Peeter Stevens, which contained, besides works by Bruegel, paintings by Van Eyck, Quentin Metsys, Hans Holbein, Rubens, and Van Dyck. A wealthy cloth merchant and city benefactor who gave alms to the poor and was a patron of the arts, he appears in the center of Willem van Haecht’s painting of 1628, The Collection of Cornelis van der Geest. Peeter Stevens also annotated a copy of Van Mander’s Schilder-Boeck with the statement that he had seen twenty-three paintings by Bruegel, of which he possessed a dozen. The catalogue “Of the most renowned Rarities belonging to the late Mr. Peeter Stevens … Which will be sold the thirteenth day of the month of August and the following days of this year 1688, in the House of the deceased” listed: “By Bruegel the elder: A very famous Heath, where peasant men and Women go to market with a cart & a swine, & others”-a lost painting which appears on the left-hand wall in The Collection of Cornelis van der Geest, from whom Stevens had bought it (a drawing with watercolor, in the print room in Munich, also shows the same subject); …” 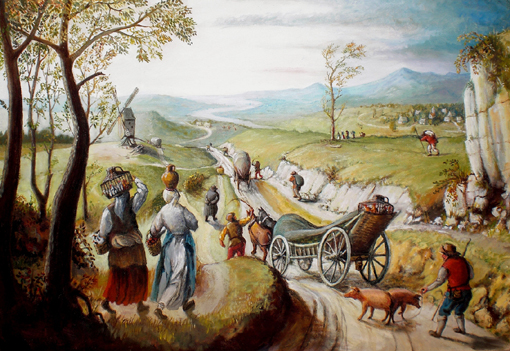 Was this really a lost Bruegel the Elder painting that now only survives in a watercolor of the collector van der Geest’s paintings?

Smith had the curator of the Rubenshuis Antwerp send him a close up photo of the section of the painting with the Bruegel. The Bruegel is high up on the left hand side and consequently at a steep angle.  Smith scanned the photo and attempted to straighten it and pull it into a rectangle. The artist of the watercolor was careful, Smith notes, “to include some detail and seems to have included enough to recognize the wagon and the tree and two or three of the people going to market. The colouring is dark…”

Smith then contacted the print room in Munich and was able to obtain a color print of the watercolor.  Smith found that the print had bits of color to distinguish different portions of the print, but it was not very helpful in discerning if the original was by Bruegel the Elder.  If the work wasn’t by Bruegel the Elder, could it have been by his son Jan? 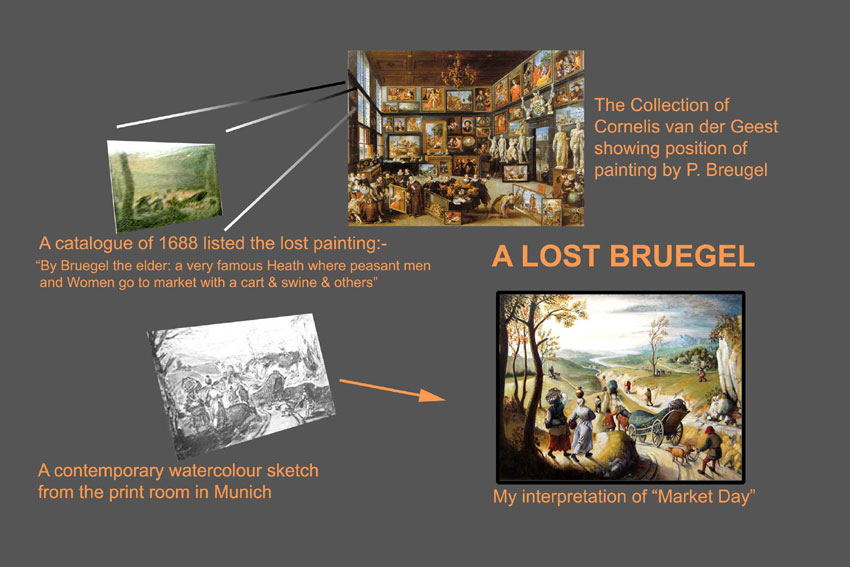 Smith studied the work of Jan Brueghel the Elder, and noted that he used the market day subject several times and also included similar images of peasants walking along a path in his other painting.  Smith notes that the jug is shown in the watercolor without a hand supporting it, which differs from his other works.

On the question of whether Pieter Bruegel the Elder initiated the design that Jan copied or whether the original in the van de Geest collection should have been attributed to his son, Smith notes that it is impossible to know for certain, but concludes that it appears to be a Jan original rather than that of the elder Bruegel.  Based on my knowledge, I would concur with this conclusion as well.

Not only is Smith conducting this type of interesting research, but he also is running an upcoming Bruegel exhibition of a selection of engravings and oil studies.  The exhibit, at the Folk Museum at Helston in Cornwall, runs from May 13 – 30, 2013.  You can find Smith’s website at http://pieter-bruegel.co.uk 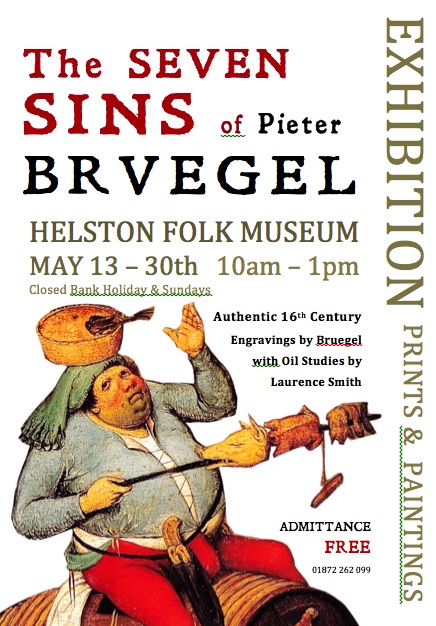