Bosch and Bruegel: From Enemy Painting to Everyday Life 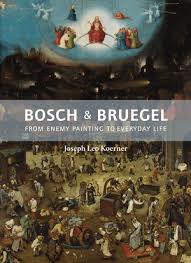 Koerner’s beautifully illustrated book focuses on the rise of secular European art after centuries’ of religious-themed works.  He chronicles the growth of secular painting, which later became known as “genre painting,” or works which portray everyday European life.  Koerner’s thesis is that the transition to secular painting had its roots in Bosch’s depictions of demons and phantasmagoric creatures, which were representations of human weakness and sin (referred to as “enemy painting”).  Bruegel’s paintings, 50 years after Bosch, also contained “undesirable” images, but instead of fantastic creatures, Bruegel focused on human foolishness in his depictions of peasants dancing and other imprudent antics.

Koerner constructs a compelling argument for this thesis, which is greatly enhanced by the book’s abundant images from both Bosch and Bruegel’s paintings.  Koerner demonstrates that surviving paintings by both artists show a commonality of subjects; demons, fools, and knaves (“gluttons, lazybones, drunkards, dupes, thieves, bullies, charlatans and quacks”).  Lost paintings by Bosch also included subjects that are now closely associated with Bruegel, including “peasant dances and peasant weddings, a huge Battle between Carnival and Lent, a Tower of Babylon, a feast of Saint Martin and works on linen of beggars, merrymakers” and others.  As Koerner notes, Bosch appears to have painted nearly all of the subjects now typically associated with European genre painting.

Not only was Bosch and Bruegel’s subject matter similar, but the gestalt of the paintings were also parallel.  A bird’s-eye point of view is common to both artist’s compositions.  In addition, Bosch and Bruegel filled their works with richly detailed, intricate figures.  Their paintings overload our senses with characters and figures that seem to stretch far beyond the limits of the physical works.  Further to the similarity of the two artist’s paintings, Koerner points out that until fairly recently, major works by Bruegel were attributed to Bosch, including “The Triumph of Death” in the Prado and “The Fall of The Rebel Angels” in Brussels.

Bosch and Bruegel’s painterly styles were similar too, in that both artists allowed the ground paint layer to penetrate the upper paint layer in certain sections, contributing to the final look of the pictures.

Koerner connects the two artists via their patrons as well.  Both were sought out by the elite of their day, including high-ranking politicians and famous humanists.  Bosch and Bruegel frequently signed their works, which was not typical of artists of this time period (with the exception of Jan van Eyck).

Koerner spends equal time discussing the artist’s differences as well, stating that “no one makes Bosch seem more historically remote than does Bruegel.”  With Bosch, the enemy is the Devil and sin, while Bruegel demonstrated that “genuine evil flourishes in the activity of ordinary people.”

The second two-thirds of the book are comprised of detailed sections relating the life and artistic output of first Bosch, then Bruegel.  Koerner reviews key works from both artists and how these works fit into the themes of the book.  For Bosch, Koerner zeros in on The Garden of Earthly Delights, which to this day continues to baffle viewers trying to “crack the code” of this enigmatic work. In a later chapter Koerner focuses on Bruegel’s The Magpie on the Gallows, tying this work back to Bosch’s heaven and hell imagery, with peasants dancing beneath the gallows.

Koerner convincingly links Bosch and Bruegel together as the originators of “genre scenes” and brings a fresh perspective to both artist’s works, tying them to the larger context of subsequent European paintings.  This book is an excellent addition to both Bosch and Bruegel scholarship, leaving the reader with an even greater admiration of these two towering artist’s talents.

A wonderful new exhibition at the Royal Cornwall Museum from September 20 to November 8 2014 explores Bruegel the Elder via art created by Laurence Smith.

Pieter Bruegel the Elder (c.1525-1569) was a Flemish artist who illustrated

people’s everyday lives and the worlds they inhabited. His work is often seen

as being one of the earliest forms of social satire in art history.

In the drawing Nobody and Somebody (1558) the character of Nobody

is shown staring at himself in a mirror, below Bruegel has written the line

“Nobody looks at himself”. Bruegel loved to turn proverbs into pictures and in

doing so held his own mirror up to what he saw as the foolishness of society.

Bruegel was predominantly known for his large, colourful oil paintings of, what

were known as, ‘peasant scenes’. These were commissioned by wealthy

patrons and rarely seen in public. However, many of his drawings were made

to mirror the colour and energy of Bruegel’s paintings. Enlarged and vividly

see our own selves, with all our virtues and vices, reflected back at us.