Brueghel in the Broom Closet

Of course it is not unusual to find a Brueghel painting in a public art collection, or in a private museum, or, increasingly, in the residence of a wealthy citizen of Russia.  What is unusual is finding a Brueghel in an out of the way location.  In what is perhaps the strangest setting in which I’ve seen a Bruegel, recently I visited the Church of Saint-Severin Paris’ Latin Quarter knowing that this church had a large format Brueghel, The Crucifixion.

Upon entering the typically fairly dark interior of the Roman Catholic church, I scanned the walls for the painting.  I wasn’t surprised that I did not see it, since I expected that it might be in one of the small chapels of the church.

After circling the church several times and not seeing the painting, I noticed an open door into a sort of closet, or anti-chamber, where there was activity.  It appeared that the church was preparing for a concert performance.

Amid the activity I stepped into the small room, scanned the walls, and much to my surprise, just above the door to another room, was the painting.  It hung approximately 15 feet above floor level and gleamed luminously.  While members of the choir were running in and out of the room, I stood back and took in the painting.  It was fantastic, large, and had the attributes of a typical Brueghel work. 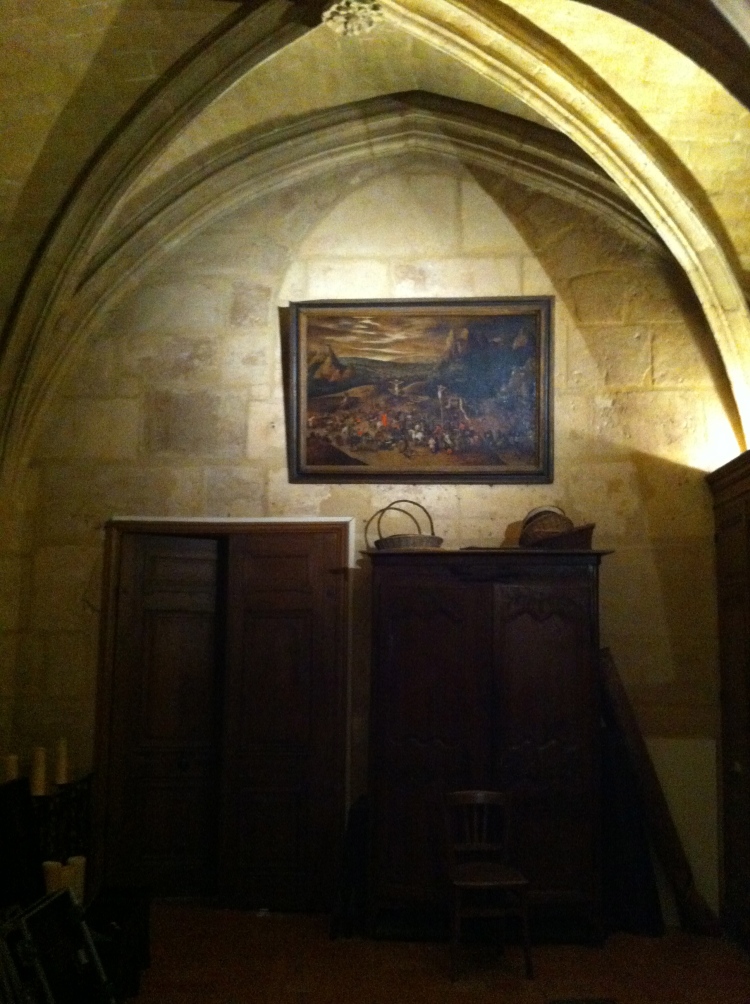 The painting is similar to other versions of the painting, showing Christ and two others being crucified in a large format landscape.  A city extends further in the distance with the temple of Jerusalem.  A field of wheat can be viewed behind the figure on the left. In the background two peaks can be seen connected by a natural bridge. Marlier notes that in this version of the painting, the sky is darker than in other versions.  It is thought that this painting is a copy after a lost work by the elder Bruegel.

As the activity in the small church room was dying down, it appeared that a concert performer was preparing to lock the door and wanted me to leave.  I exited the room, and the door was closed behind me.

I wondered if my visit hadn’t coincided with musicians preparing for a performance, if I would have been able to see the painting.  It seemed like the door to this room was normally closed, and only happened to be open because of the performers preparing for the concert.

In life, as with seeing Bruegel/Brueghel paintings, timing is everything.  Particularly when there is a Brueghel in a broom closet-like setting.

4 thoughts on “Brueghel in the Broom Closet”