This tag is associated with 4 posts

We were fortunate enough to obtain an exclusive preview of the upcoming event, “The Bruegel Success Story,” to be held 12-14 September 2018 in Brussels, Belgium.  (http://conf.kikirpa.be/bruegel2018/) This can’t-miss conference kicks off a number of activities celebrating the life and work of Pieter Bruegel the Elder, who died 450 years ago.  We corresponded with one of the conference organizers, Dr. Christina Currie, Royal Institute for Cultural Heritage (KIK-IRPA), who gave us this exciting preview of the conference:

1) What led to focusing on Bruegel and his family for this conference?

The year 2019 is the 450th anniversary of Pieter Bruegel the Elder’s death. In Belgium and in Vienna, this is being marked by a series of events that will celebrate his career and his influence on later generations. The Bruegel Success Story conference, organised by the Royal Institute for Cultural Heritage (KIK-IRPA) in collaboration with the Royal Museums of Fine Arts in Belgium, will kick off this season of activities and will give a riveting context for all the subsequent Bruegel themed happenings.

2) What will attendees of the conference learn?

Attendees will be exposed to the very latest in Bruegel research through the eyes of experts from all around the world. Eminent keynote speakers Leen Huet (Belgium), Elizabeth Honig (USA) and Matt Kavaler (Canada) will introduce each of the three days. Over the course of the conference, presentations will cover the life and work of Pieter Bruegel the Elder as well as that of his artistic progeny, including the astonishingly exact replicas of his paintings produced by his elder son Pieter Brueghel the Younger and the exquisite paintings of his younger son Jan Brueghel the Elder. Fascinating new findings on the creative process of Bruegel the Elder as well as that of his dynasty will be presented for the first time, thanks to new high resolution scientific imagery. But the conference does not neglect the essential meaning behind these beautiful works of art. Several speakers will concentrate specifically on the interpretation of Bruegel’s paintings and drawings, which can be quite subversive when seen in an historical context. Interesting new facts about the life, family and homes of the Bruegel family will also be revealed.

3) Who should attend this conference?

The Bruegel Success Story is intended for all art lovers with an interest in Flemish painting and particularly those attracted to Bruegelian themes such as peasant dances, landscapes, proverbs and maniacal scenes. Students of art history, art historians, restorers and collectors should not pass up this opportunity.

3) There are a number of papers focusing on Pieter Bruegel the Elder’s painting “Dulle Griet.” Why is that painting receiving attention now?

The Dulle Griet, in the collection of the Mayer van den Bergh Museum in Antwerp, has just undergone the most thorough conservation treatment in its recent history. This has brought to light many original features that were previously hidden behind a murky brown varnish and overpaint. The restoration, carried out at the Royal Institute for Cultural Institute in Brussels, was accompanied by in-depth technical examination that resulted in fascinating discoveries about Bruegel the Elder’s creative process. The conference attendees will hear how this great artist conceived, developed and painted this bizarre macabre composition. Leen Huet, one of the keynote speakers and author of a sensational recent biography on Bruegel the Elder, will delve into the hidden meaning behind the Dulle Griet.

4) One of the biggest bombshells in recent years was the revelation in your book (“The Brueg(h)el Phenomenon”) that Bruegel the Elder’s two versions of “Landscape with the Fall of Icarus” were not painted by Bruegel the Elder. Will there be similar surprises unveiled at the conference?

I can say that attributions will be debated during the conference. This is always the case when a group of experts on a particular artist or dynasty get together. And it can lead to sparks flying as opinions naturally diverge!

5) There has also been a good deal of investigation into Bruegel’s extended family lately.  What will attendees learn about Bruegel’s family at the conference?

Pieter Bruegel the Elder’s paintings were so loved that his son and heir Pieter Brueghel the Younger made his entire career out of producing replicas for an insatiable art market in the late sixteenth and early seventeenth century. Jan Brueghel, his younger brother, updated the family tradition, branching out into flower paintings, allegories and mythological themes. The next generation produced several renowned painters too, including Abraham Brueghel, who traded on the family name. The paintings of the Bruegel dynasty, as well as those of lesser-known artists working in the Bruegel tradition in the Low Countries and abroad, will feature amongst the exciting new material presented during the conference.

An interesting Pieter Brueghel II painting came to our attention in late May of this year.  Listed as “PIETER BRUEGHEL (attr. a)” in the June 1, 2016 auction catalog for the Genoa, Italy auction house Wannenes, this small 18 cm tondo work leapt from the catalog pages with its delicate brushwork and exacting execution.  The work had an estimate of only €1,600 – €1,800, yet shimmered from the catalog pages.

Details such as the delicate red thread winding around the pants of one of the peasants was a clear sign that this work should not simply be attributed to Pieter Brueghel II, but was likely an original work by the artist.  A quick review of Klaus Ertz’ catalog raisonne of Pieter Brueghel II showed that other similar works were painted by the artist and his workshop, but this clearly escaped the notice of the seller as well as Wannenes.

The day of the auction arrived, and when the lot (number 504) was put up for bid, prices quickly skyrocketed beyond the paltry estimate.  Within a minute bidding was already over €30,000.  The auction ended with the work selling for approximately €68,000 (€74,400 with buyer’s premium).  We wondered how soon we would see the work at auction again, this time with a much larger price attached.

It didn’t take long for the work to reappear.  Scarcely more than three months after the June 1 auction, the work has appeared again, to be sold by Dorotheum in Vienna on October 18, 2016.  In a new frame and with a certificate of authenticity from world renowned Brueghel II expert Dr. Klaus Ertz, the work now carries an estimate for €180,000 – €220,000.

In the intervening moths the painting appears to have undergone cleaning, with some of the paint loss evident in the Wannenes version corrected and the overall work removed of centuries of grime (see comparison of images below).

Congratulations to the initial buyer who will likely be able to turn a tidy profit of €100,000 or more, depending on the final sale price.  This is another classic example of how cleaning a painting, fitting it in a handsome new frame and, most importantly, authentication from Dr. Klaus Ertz can transform the value of a Bruegel II. 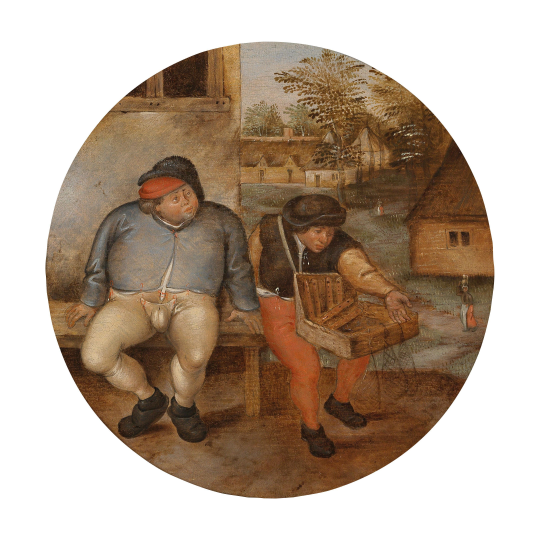 Version to be sold October 18, 2016 at Palais Dorotheum

“Children’s Games” Variant – What Do We Know?

Over the past few months we have had an opportunity to study an interesting “Children’s Games” variant.

We have studied the infrared reflectography image taken, as well as an X-ray image and several images created with various light and dark shading.

Let’s review the images and discus what they reveal about the painting:

First, this image (below) clearly indicates that the painting is quite dirty through age and discoloration of varnish.

This image (below) with light raking from the right side make clear the few small places on the painting which have been cleaned, so the bright colors of the original panel come through, such as in the upper right corner where the sky has been cleaned and the middle left, where the young girl has been cleaned.

An ultraviolet light image (below)  shows clearly some of the damage to the painting that has occurred over the decades.  The most pronounced damage is along edge where the first and second panels were joined together.  There also is damage in the middle of the painting with a few scratches.

One of the mysteries that we are trying to solve with this analysis is to determine when the painting was created.  The image below of raking light on the back of the painting clearly shows that the 3 boards which comprise the painting were created with saw-type tools, and don’t appear to be created by a machine.

A recently published monograph “Frames and supports in 15th- and 16th-century southern netherlandish painting” by Hélène Verougstraete has been instructive in our analysis of the marks on the back of the panel.  This has been instructive relative to how the panel was created.  While none of the images in the monograph are an exact match, some, such as the figure a (page 33) appear to be somewhat close.

However, we aren’t able to date the panel with certainty based on this information.

The image below clearly shows the repair that panel has undergone, most noticeably the increased support that the panel has had to repair and support the joining of the first two panels, where the damage in the other panels can readily be seen. 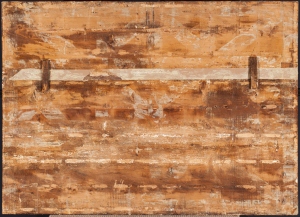 We are continuing to examine this panel and look forward to sharing our findings here!

Brueghel in the Broom Closet 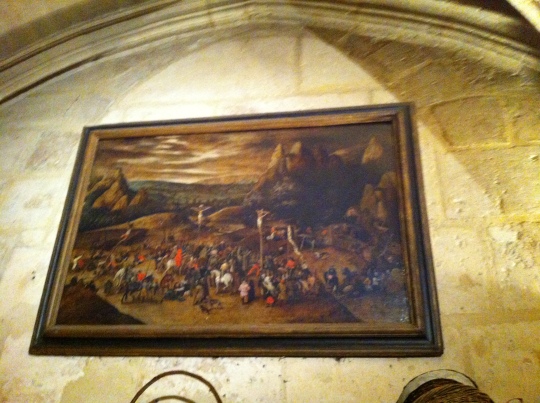 Of course it is not unusual to find a Brueghel painting in a public art collection, or in a private museum, or, increasingly, in the residence of a wealthy citizen of Russia.  What is unusual is finding a Brueghel in an out of the way location.  In what is perhaps the strangest setting in which I’ve seen a Bruegel, recently I visited the Church of Saint-Severin Paris’ Latin Quarter knowing that this church had a large format Brueghel, The Crucifixion.

Upon entering the typically fairly dark interior of the Roman Catholic church, I scanned the walls for the painting.  I wasn’t surprised that I did not see it, since I expected that it might be in one of the small chapels of the church.

After circling the church several times and not seeing the painting, I noticed an open door into a sort of closet, or anti-chamber, where there was activity.  It appeared that the church was preparing for a concert performance.

Amid the activity I stepped into the small room, scanned the walls, and much to my surprise, just above the door to another room, was the painting.  It hung approximately 15 feet above floor level and gleamed luminously.  While members of the choir were running in and out of the room, I stood back and took in the painting.  It was fantastic, large, and had the attributes of a typical Brueghel work. 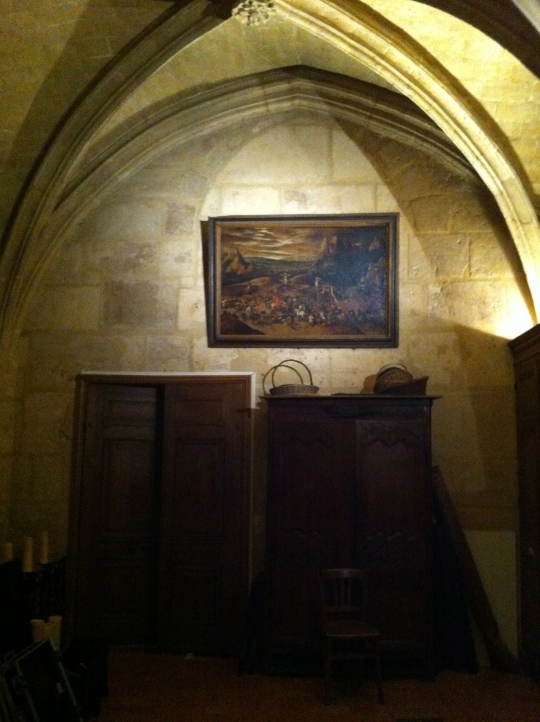 The painting is similar to other versions of the painting, showing Christ and two others being crucified in a large format landscape.  A city extends further in the distance with the temple of Jerusalem.  A field of wheat can be viewed behind the figure on the left. In the background two peaks can be seen connected by a natural bridge. Marlier notes that in this version of the painting, the sky is darker than in other versions.  It is thought that this painting is a copy after a lost work by the elder Bruegel.

As the activity in the small church room was dying down, it appeared that a concert performer was preparing to lock the door and wanted me to leave.  I exited the room, and the door was closed behind me.

I wondered if my visit hadn’t coincided with musicians preparing for a performance, if I would have been able to see the painting.  It seemed like the door to this room was normally closed, and only happened to be open because of the performers preparing for the concert.

In life, as with seeing Bruegel/Brueghel paintings, timing is everything.  Particularly when there is a Brueghel in a broom closet-like setting.