“Children’s Games” Variant – What Do We Know?

Over the past few months we have had an opportunity to study an interesting “Children’s Games” variant.

We have studied the infrared reflectography image taken, as well as an X-ray image and several images created with various light and dark shading.

Let’s review the images and discus what they reveal about the painting:

First, this image (below) clearly indicates that the painting is quite dirty through age and discoloration of varnish.

This image (below) with light raking from the right side make clear the few small places on the painting which have been cleaned, so the bright colors of the original panel come through, such as in the upper right corner where the sky has been cleaned and the middle left, where the young girl has been cleaned.

An ultraviolet light image (below)  shows clearly some of the damage to the painting that has occurred over the decades.  The most pronounced damage is along edge where the first and second panels were joined together.  There also is damage in the middle of the painting with a few scratches. 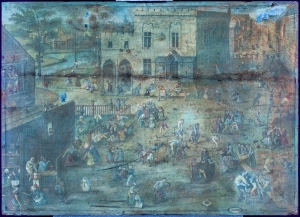 One of the mysteries that we are trying to solve with this analysis is to determine when the painting was created.  The image below of raking light on the back of the painting clearly shows that the 3 boards which comprise the painting were created with saw-type tools, and don’t appear to be created by a machine. 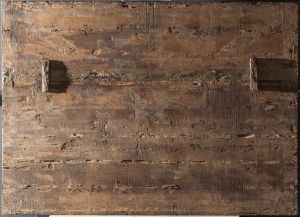 A recently published monograph “Frames and supports in 15th- and 16th-century southern netherlandish painting” by Hélène Verougstraete has been instructive in our analysis of the marks on the back of the panel.  This has been instructive relative to how the panel was created.  While none of the images in the monograph are an exact match, some, such as the figure a (page 33) appear to be somewhat close.

However, we aren’t able to date the panel with certainty based on this information.

The image below clearly shows the repair that panel has undergone, most noticeably the increased support that the panel has had to repair and support the joining of the first two panels, where the damage in the other panels can readily be seen.

We are continuing to examine this panel and look forward to sharing our findings here!